A downloadable game for Windows and macOS

War is in the air. Welcome to the tail turret, where the only things standing between you and a watery grave are your gun and your own rotten luck. Test your skill in wave after wave of arcade-style aerial combat. Choose between survival and glory with 10 different challenge modes. Rack up high scores to become the most notorious gunner of your time. Your comrades say you'll be in the drink before the day is out, but life's a gamble and no one lives forever. Give 'em hell, Ace!

In order to download this game you must purchase it at or above the minimum price of $2.99 USD. You will get access to the following files:

Cool game! Any way to invert the mouse? I've played too long inverted and can't get used to anything else :(

cant stop even though i cant get past the 6.5

It's amazing how a game as simple as this can be so fun when done right. Where can i get the soundtrack in the menu? It's nice.

Glad you enjoyed it. The song in the menu is "Play Play Play" by the Shtriker Big Band.

Awesome game, did a gameplay video, sorry for the cringe intro

Thanks, glad you enjoyed it!

Thank you for the giveaway!

Thanks for the video!

I really enjoy this game! It’s so fun and simple, the combat feels smooth and satisfying, the graphics are nice too. Though I agree that the sound could use some little work.

Also, it would be awesome if you made a Linux build! Any plans for that? I am a Unity developer myself and I will be more than glad to help.

I've been meaning to do a linux build, but haven't had the time to spin up a linux install to test it. If you're willing to help us test, shoot us an email at info@grizzly-machine.com.

I reviewed this game in my latest video! Check it out!

Fun little game. I had to max out cursor sensitivity all the way, because the aircraft fly all the way from one side to the other so fast.

I would say that the weakest part of the game, by far, is the audio. My gun doesn't sound strong at all so it's disappointing to me. I don't hear the tinkling of bullets on metal. I hear no explosions upon taking out planes, nor a loud splash when enemy planes drink the ocean, so defeating them doesn't feel satisfying (hearing "Ya got 'im!" is nice but nowhere near sufficient). I wanna hear hellfire from the movie Midway, especially in Flak stages. I wanna hear the rush and boom, as well as feel the riveting impact through chassis-shaking, of a missile.

Additionally, it's awkward to hear the exact same radio clip play twice in a row. There should be a variety of 3 different types of radio clips per event, so the game can at least cycle through them without repeating any same one adjacently. The same goes with the defeat radio tone; there's gotta be more for your pilot to mention than swimming trunks, haha.

Lastly, I think being able to select between 3 different types of guns would be cool (like a faster gun that deals less damage per round, and vice-versa). Then maybe players can find their optimal play styles.

Thanks for the feedback!

I love this kind of game! thank you so much! Nice idea of the hud on the gun itself.

should it be downloadable yet?

Not quite yet! We're very nearly ready. We're burning through the last tweaks and fixes as we speak. We'll post a community update once its live.

EDIT: The game is now live! 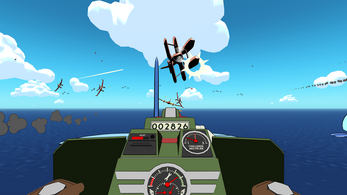 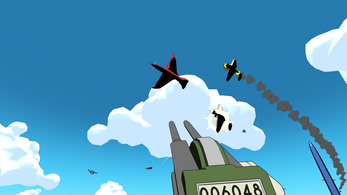 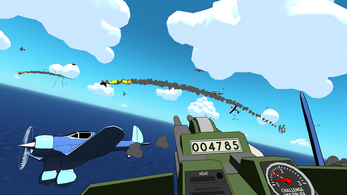 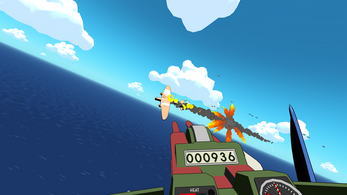 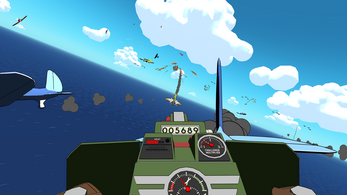 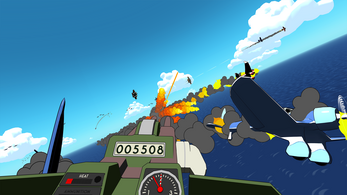